Japanese beetles are commonly found in regions where the grass is watered frequently or where there is an irrigation system because of their feeding habits. These regions include home lawns and golf courses.

Japanese beetles destroy flowers, plants, and grass as a result of their eating habits. While feeding, adult beetles will damage the tissue of leaves and leave behind skeleton-looking leaves that only have the veins intact, which causes the plant to die.

Grubs or Immature Japanese Beetles can also cause destruction as they live beneath the soil and feed on the roots of grass and different plants which creates dead grass patches. If left unchecked, the whole field of grass can be destroyed.

How to get rid of Japanese Beetles?

You can get rid of Japanese Beetles with the help of the following traps and repellents available in the market: 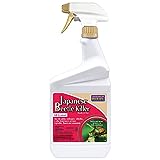 This Japanese beetle killer helps to control and provide protection from Japanese beetles, aphids, fleas, beetles, leafhoppers, caterpillars, stink bugs, moths, Colorado potato beetles, webworms, and various other insects as it is an effective and instant solution to get rid of pests in no time.

This Japanese beetle spray protector can be used in residential areas, indoors, outdoors, and greenhouses.

Bonide Japanese Beetle Killer can be safely used on vegetables, flowers, ornamentals, trees, shrubs, bushes, and herbs to provide instant protection from pests, maintain the greenery, and for aesthetic purposes as well.

How to Use: Bonide Japanese Beetle Killer is not a contact spray and therefore, should be drizzled where beetles are most likely to be found. Or you can directly spray it on the beetled or other bugs. 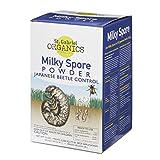 This particular repellent enables a natural way to get rid of Japanese beetles and provides protection for around ten years and is best suited for organic farming.

It is a user-friendly and eco-friendly product as it is safe for use around children, house pets, and does not cause any harm to the environment.

However, Milky Spore Japanese Beetle is effective only against Japanese Beetles as it provides instant protection from them by using natural bacteria that eat the beetle from inside.

How to Use: You can use the spore by mixing it with fertilizer and then spreading it all over your lawn or the infested area.

This Japanese beetle killer is a long-lasting and highly effective repellent as it provides protection to roses and various other fruit plants and trees while allowing them to grow and bloom at the same time.

Spectracide Bag-A-Bug Japanese Beetle repellent can be used over and over again and provides a large coverage area of up to 5,000 sq. ft.

How to Use: You would need a lure, set of interlocking vanes, and two bags along with hand ties, before you start using this repellent. 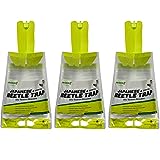 RESCUE! Reusable Japanese/Oriental Beetle Trap is easy to use as it has a built-in feature of easy lock bottom.

It is reusable as it can be emptied again and again throughout the beetle season and the reusable bags do not attract the beetles directly but rather prevent them from attacking the plants.

How to Use: You just need to loosely hook the re-usable trap about a foot from the surface. The bag should be hung opposite to the direction of the wind and about 5 ft. apart from the flowers.

This Japanese beetle trap makes use of a dual-action system to trap the beetles as it makes them irresistible to the lure. The disposable bags ensure that the Japanese beetles are trapped securely and don’t escape.

How to Use: You just need to hang the bait near the affected area and keep a regular check on the trap. Later on, when the disposable bag is full, replace it with a new one. 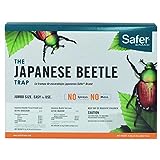 This Japanese beetle trap helps in preventing ecological degradation and loss caused by the beetles by placing the bait at least 10 ft. away from the plants.

Safer Brand 70102 Japanese Beetle Trap is a long-lasting and highly effective trap as it attracts the beetle and then cages it. Additionally, it is a cost-effective product as it can be reused multiple times.

How to Use: You would need a lure, bait, and two bags along with hand ties, before you start using this trap.

This Japanese Beetle Trap attractant is a very fast and effective way to get rid of destructive Japanese beetles as it is made up of all-natural, organic compounds that provide a natural scent that helps in tempting the beetles into the trap.

It is made in the USA and all its components meet the EPA’s minimum risk pesticide requirements as it is a non-toxic product that does not make use of any chemicals and hence, does not cause any harm to the environment.

However, Donaldson Farms Japanese Beetle Trap Attractant should be kept away from the reach of children and other house pets and you should thoroughly wash your hands with use after every use. Also, prevent the attractant to come in contact with clothing and furniture.

How to Use: It is easy to use as you just need to add a few drops of the attractant on the bait and it would instantly start protecting your surroundings by attracting the beetles in to the trap.

Before buying any repellent to get rid of the Japanese Beetle, you should keep the following points in mind and make sure that the repellent is suitable for your use:

You can get rid of Japanese Beetles with the help of various repellents available in the form of traps and insecticides. However, you should choose non-toxic repellents as they won’t cause any harm to trees, plants, fruits, vegetables, and would be safe to use around children and other animals.