Gophers are burrowing rodents that are endemic to North and Central America. They are known for their notorious tunneling activities that can cause severe damage to your trees, plants, lawns, garden, and farms.

Gopher are not known to pose any severe threat to humans but they might carry rabies, fleas, and ticks which may create lot of inconvenience.

The various types of traps available in the market to get rid of Gophers are:

Wire gopher traps are comparatively cheaper than other traps and can be placed at different place as it does not require you to dig a large hole.

Blackhole gopher traps are flexible and have easy application. It looks like a gopher tunnel to attract the gopher and is the most expensive trap of all.

Box gopher traps are old in style and simple in its functionality. They are large and clunky boxes and best to buy if you want a confusing trap at a moderate price.

How to Get rid of Gophers?

Below are the best traps available in market to get rid of Gophers.

How to Trap Gophers

You can trap a Gopher easily by following the steps listed below:

Top 8 Best Traps to Get rid of Gophers

The following are some of the best traps available in the market to get rid of Gophers:

Victor Gopher Trap has a short base and a narrow design for easy application. The galvanized steel ensures the durability of the trap and the pincher-style can be used in mound opening or runways as the motile parts are firmly underground when in use, and the trap as a whole can withstand rough weather conditions.

How to Use: You can use the trap by following the steps mentioned below:

This gopher trap is a non-toxic product, also, it is easy to use and clean as the traps needs to be set above the ground and doesn’t require any shovel or bait. Gopher-Hawk Trapping Set includes components such as wedge and probe that ensures organic trapping without any mess.

How to Use: This gropher trap is easy to use as you just need to pull it in to a set position. It can trap the Gopher instantly by snapping it and you can determine when you have trapped one by seeing a yellow band once it’s sprung. 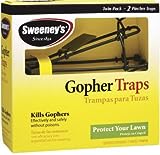 Sweeney’s Gopher Trap is a non-toxic, reusable trap that can withstand rough weather conditions. It has a pincher-style design that can be used in mound opening or runways.

The steel material and powder-coating used ensures durability as the motile parts are completely safe to use around children and pets.

How to Use: Using this trap, you can use the trap gopher by following the steps mentioned below:

Macabee Gopher Trap is a high-quality trap made up of carbon spring steel wire, that does not clog or rust.

It is suitable for both casual gardener or large-scale farming as it ensures quick and efficient trapping of gopher with its twisted wire design, that works best even in a restricted space. It also includes an extra-large trigger that increases its reliability of trapping a Gopher perfectly.

How to Use: Follow below listed steps to trap gopher using Macabee Gopher Trap:

Fasmoy Humane Live Small Animal Trap is durabley and resistant to rust as it is made-up of galvanized steel. It is effective against Gophers, Squirrels. Rats, and other similar sized animals as it has a small opening and a strong door lock that prevents them from escaping.

How to Use: You just need to add bait to the trap, and when the gopher will slightly touch it the door will get closed which ensures no escaping of the gopher. This gopher trap is easy to set traps, just put the bait and rest on the trap. You just need to release the gopher, once captured. 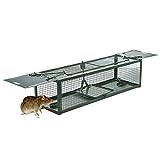 Humane Animal Live Cage Rat Cage Trap is ideal for trapping gophers, mice and, other rodents as it can be used both indoors as well as outdoors.

This gophers trap uses non toxic bait, wont harm gophers, enables catching gophers alive, then relocate them. It is safe to use around pets and children and effectively.

This trap has two powerful spring doors that allows the gophers to penetrate from any direction which makes it effective in capturing gophers quickly.

How to Use: It is advised to use gloves and place a variety of bait and set it around the trap so that it leads the gopher into it. You just need to set the trap and the gopher will be caught once it enters the trap. 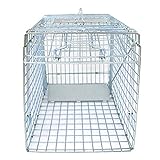 This gopher trap is made up of metal and weighs 9.3 pounds, making it suitable to trap Gophers, raccoons, groundhogs, squirrels, rabbits, possums, moles, gophers, Gophers, chipmunks, and other animals.

HomGarden Humane Live Animal Cage Trap comes pre-assembled and can be used safely around children and other pets as the sensitive triggers and small mesh opening does not allow the trapped Gopher to escape.

This trap also includes a large handle to provide you protection while transporting the animal, and a back door for quickly releasing the animal, making it suitable for homes and farms.

How to Use: You need to set the release switch for the door very lightly and ensure that the hook is not angled to the side. Keep the hook straight and as cantered as possible. Since the trap has a sensitive trigger and a short trigger rod, as soon as the pedal touches the rod, it would shut the door immediately and trap the Gopher.

This gophers trap made up of heavy-duty, alloy steel so that creatures can’t chew through the mesh and escape. The trap is excellent for gophers, racoons, possums, groundhogs, beavers and similar sized animals.

Its collapsible design and easy to fold feature saves space, and the highly sensitive trigger assures that the single door shuts down instantly.

LifeSupplyUSA gopher trap will help to catch gophers unharmed, and you can safely relocate them away from your home.

How to Use: The trap comes in a pre-assembled form and you just need to place the bait. Place the bait towards the end of the trap or at the back door to ensure that the Gopher gets trapped completely.

Before buying any trap to get rid of Gophers, you should consider the following points and check if the trap is suitable for your use:

The best way to get rid of gophers is not by harming them but by humanely trapping them and taking them to a safe place, far away from your home.

There are various Gopher traps available in the market that don’t make use of any poison and safe to use around children.

The majority of the traps are made of galvanized steel to prevent it from corrosion, have a sensitive trigger, can trap various rodents, and include a safety handle and smooth inside edges to protect the trapped animal and you from any harm.