As you all know roaches are dangerous insects and very harmful to health. More importantly, roaches may cause several problems to the people with any kind of allergies. Hence, it is extremely important for you to take care of necessary measure to get rid of roaches as soon as you spot them.

There are several repellents available in the market to get rid of roaches. Roach bombs, also known as roach foggers, are one of proven type of repellents that work effectively against roaches.

List of Top 6 Roach Bombs to Get rid of Roaches

The following are some of the best Bombs or Foggers available in the market to get rid of Roaches:

How does a Roach Bomb or Fogger work?

Roach Bombs or Foggers comprise of insecticides and generate fog once activated. The fog is suspended in the air for a while before resolving on the ground where it proceeds to work.

Any roach that comes in contact with the fog in the air or after it has settled on the surface, gets killed immediately.

The drawbacks of this method are that the fog does not always reach into the cracks and holes of the house which is where roaches stay the majority of the time. Due to this, you would need to frequently apply pesticides to those places.

Apart from this, most of the roach bombs contain powerful chemicals that may threaten one’s health due to continued exposure. 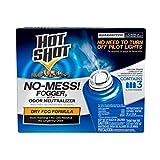 This roach bomb comes with an odor neutralizer and a deep-reaching dry fog formula that effectively kills any crawling and flying roaches or bugs present in your home.

It builds a fine, penetrating mist that reaches even the deepest cracks and holes, effectively removing roaches and bugs hiding under the furniture and accessories. The formula is safe to use indoors as it doesn’t stain or leave any oily debris or lingering aroma behind.

Unlike other insect killers, you will not be required to turn off the pilot lights when you use Hot Shot No-Mess Fogger with Odour Neutralizer and can be used in enclosed spaces such as attics, apartments, cabins, basements, barns, storage areas, and trailers to get rid of roaches and other bugs for up to six weeks. 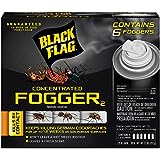 This Roach Bomb has a complicated trigger mechanism but is highly effective against roaches, ants, spiders, fleas, mosquitoes, and various other pests.

Black Flag Concentrated Fogger is capable of getting rid of German Cockroaches for up to 12 weeks on a non-porous surface and can be safely used indoors as it does not leave any wet residue behind or create any mess. 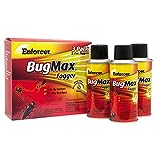 This particular roach bomb is a water-based, non-Permethrin, indoor fogger that is effective against roaches, ants, fleas, crickets, earwigs, pillbugs, spiders, flies, mosquitoes, brown dog ticks, water bugs, and other insects that may inhabit your house.

One of the active ingredients used in this roach bomb is Cypermethrin that acts as a fast-acting neurotoxin for insects and does not leave any staining residue.

Enforce Bug Max Indoor Insect Fogger can provide protection up to 12 weeks along with an area coverage of about 1,000 cubic feet per ounce. 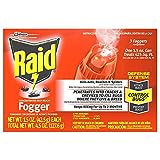 The Raid Concentrated Deep Reach Fogger makes use of a concentrated formula that works effectively against roaches, ants, and spiders that might be hiding at your place.

This roach bomb can easily penetrate into difficult to reach areas of your house including every crevice and crack.

You just need to spray the entire canister once and Raid Concentrated Deep Reach Fogger would keep getting rid of roaches and bugs for up to two months. Additionally, roach fogger does not leave any stain or wet residue behind on the surface. 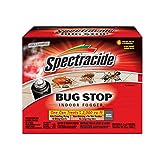 Spectracide’s Indoor Fogger is effective against roaches as its for-and-return mechanism shows quick results within two hours of use and makes sure that there are no roaches in your house for the rest of the day. This roach bomb does not leave any odor, stain, or residue behind. 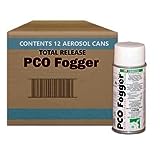 The active ingredients of this roach bomb include pyrethrin, butoxide, piperonal, and dicarboximide, giving it extraordinary power and scope in enclosed regions such as storage area, barn, garage, crawlspace, any commercial construction, restaurants, warehouse, school, clinic, and so on.

PCO Products Pyrethrin Fogger is highly effective against roaches, fleas, ants, spiders, weevils, and any other flying insects, and provides coverage up to 5,000 cubic feet.

How to use a Roach Bomb or Fogger?

You can use a Cockroach Bomb or Fogger by following the steps mentioned below:

You should keep the following things in mind while using a Roach Bomb or Fogger:

Roach Bomb or Foggers is considered to be one of the most effective ways to get rid of roaches. There are various types of chemical-free foggers available in the market making them safe to use indoors, in the presence of children and animals.

However, some precautions such as covering your food, turning off smoke detectors, etc. are needed to be taken while using them.