Scorpions are predatory arachnids having eight legs and a narrow, segmented, venomous tail curved towards its back. They are assumed to dwell only in deserts but they live in a variety of other habitats as well.

Scorpions are nocturnal, i.e., they remain out of sight during the daytime and come out at night to hunt spiders, centipedes, pests, and other scorpions, by paralyzing them with its toxins.

The majority of scorpions that enter houses are non-poisonous, except for two species found in Arizona, California, New Mexico, and Texas. Bark Scorpion is said to be the most toxic amongst all scorpion species.

When do Scorpions sting?

The majority of scorpion species are not harmful to humans and they don’t sting humans unless they are threatened. When they are disturbed, they either flee or give a display of risk but don’t sting. People who are allergic to scorpions are the ones most vulnerable to their toxic sting.

How to get rid of Scorpions?

Since scorpions require moisture to survive, any loss of it will be harmful to them. The following 9 are the best repellents to get rid of Scorpions:

Top 9 Scorpion Repellents to Get rid of them

This repellent wields Cyfluthrin as the active ingredient to kill various crawling pests. It can be used both indoors and outdoors and has a long-term residual effect against scorpions which lasts up to 90 days.

Since this scorpion repellent is very powerful, it should not come in contact with your skin when moist.

How to use: The 16-ounce product bottle can be used to make 16 to 20 gallons of maximum strength pesticides by mixing it with a pump-up sprinkler.

This scorpion repellent uses ingredients such as Prallethrin, Esfenvalerate, and Piperonylbutoxide as a synergist to enhance the effectiveness of the other two ingredients.

It can be used indoors as well as outdoors and the residual impact results in long-term control against scorpions.

How to use: Mix the product with one gallon of the pump-up sprayer, as per the instructions stated on the label, and then it would be ready for use.

Delta Dust Scorpion repellent comes in a powder form and includes Deltamethrin, a man-made pyrethroid. Avoid getting the product near your face as it might cause some reactions.

How to use: Adjust the nozzle tip of the bulb duster directly against any crack or crevice, and squeeze so that the product would come out as a fine cloud of dust. 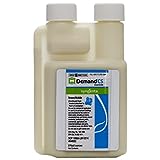 Syngenta Demand CS wields Cyfluthrin as the active ingredient to kill various pests. It has a long-term residual effect which lasts up to 90 days. However, the product works slower against scorpions and is banned in New York.

How to use: Mix the repellent with water in a gallon pump-up sprayer and use it. The 8-ounce product bottle would create 8 to 10 gallons of pesticide.

This scorpion repellent doesn’t have to be stirred and is ready to use the minute you get it. Terro Scorpion Killer Spray utilizes Prallethrin as an active ingredient.

How to use: The product comes in a ready-to-use spray bottle along with an adjustable nozzle which makes it easier to spray the product in between cracks and crevices.

This repellent uses SmartCap microencapsulation technology that protects cyfluthrin to create a long residual effect. It is effective against a wide range of pests including scorpions.

It has a quick knockdown and a long-term residual effect which lasts up to 90 days. It can be used indoors and outdoors and has a very slight odor.

How to use: Mix the product with water in a gallon pump-up sprayer and use it. You can mix either 1 ounce or 2 ounces in 1 gallon water depending on your requirement either low mix rate or high mix rate.

Glue traps are also known as ‘sticky boards’ and ‘insect monitors’ as their main aim is to monitor and trap the insects, not kill them. This trap also works to trap scorpions.

Effective Against: Any type of pest including scorpions

How to use: Place the glue trap where you doubt scorpions are hiding like dark, moist areas. Check the traps regularly until the pest is caught.

Before buying any product to get rid of scorpions, you should consider the following points and check is it is suitable for use:

What type of Scorpion Repellent suitable for you?

The following points will help you in deciding which type of product is most suitable for you to get rid of Scorpions:

Sprayers are mainly used indoors against individual pests. They are generally less toxic than other products and while direct skin contact should be avoided, they are innocuous once they dry off.

They come in handy when you come across random scorpions, but they lack both strength and quantity when it comes to getting rid of multiple adult scorpions.

They have some residual impact but it is not as long and effective as that of other heavy-duty products.

On-contact scorpion killers have a strong residual impact and kill scorpions almost instantly. They are usually sold in big tubes and have a long-lasting impact on the areas they are applied to.

However, they are highly toxic which might create problems for people having children and pets, living in residential areas around food processing facilities.

Scorpion insecticides are planned mostly for their residual impacts but have a less on-contact impact. Consumers tend to believe that if an insecticide doesn’t kill the scorpion immediately upon contact then it won’t have a powerful residual impact, but that’s not true often.

These repellents are most helpful as preventive measures and they need to be re-applied thoroughly around the boundaries.

Scorpions are harmless to humans unless threatened, but their predatory nature makes it important to get rid of them as soon as possible.

There are various products to get rid of them but the majority of them contain highly toxic chemicals that should be kept away from children and other animals.