Voles are small, mouse-like rodents that have a rounded muzzle. Their ears are usually hidden by their fur and they have small eyes and a short tail. They are commonly found in Eurasia and North America.

Voles mainly cause damage to young trees, shrubs, and plants by chewing the base of unprotected stems, which results in the death of the plant. They mostly gnaw on the roots of plants such as parsley and celery.

Voles are not known to cause any physical harm to humans but they can spread various diseases, making it essential to get rid of them as soon as you get to know about their presence.

Top 5 Best Voles Traps to get rid of Voles

The best way to get rid of any creature is using a humane way.
The following some of the best Humane Traps available in the market to help you get rid of Voles: 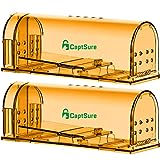 Humane Mouse Trap is made up of strong, high-quality ABD plastic, which makes the trap easy to clean. The trap does not make use of any glue or poison, making it safe for indoor use, especially around children and other animals.

It includes a Spring Door that shuts down once the rodent gets inside to eat the bait (placed by you through Tail Door). Once the door shuts, the rodent can’t get out until you unlock the trap.

User Review: The trap is an effective way of catching voles and requires barely any effort. I placed the trap in my garden after adding the bait, and it trapped the vole with ease, without harming its tale. 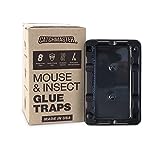 Catchmaster is a heavy-duty, glue trap that provides professional strength and requires no additional bait. It is a perfect alternative to glue boards that may not hold up well in humid or damp areas like bathrooms for basements.

This voles trap makes use of a non-toxic, sticky formula that when deployed under normal conditions, lasts for around one year.

It can be used indoors, outdoors, and in sensitive areas as well where rodenticides or snap traps are either prohibited or don’t work effectively.

How to Use: Since the trap is pre-baited with glue formula, you just need to divide the two boards and place them along a wall where mice like to travel or are seen frequently.

User Review: The traps’ glue is strong enough to trap the vole but it can’t trap multiple moles due to its small size. I placed the trap in my attic and successfully trapped various insects like flies and spiders, along with the vole. 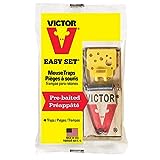 These voles traps are pre-baited with an outsized, scented ‘swiss cheese’ plastic trip pedal that ensures quick and clean trapping. It does not require any chemical or poison to work and hence, is safe to use around kids and pets.

The pedal in the trap can be activated by both, accidental contact and rodent’s interest in food as they scurry across the floor – to ensure maximum trapping. Once the rodent triggers the pedal, the mousetrap immediately springs shut to eliminate the pest.

How to Use: It requires patience to set up the trap as it gets snapped down even with the slightest of touch. After placing it, you need to set the trigger and lock the bait in the trap and let the trap do the work.

User Review: It was a really difficult task to set-up the trap as it kept snapping in middle. I don’t think that this trap is worth all the investment even if it is a humane way to get rid of voles. 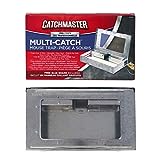 The Catchmaster Multi-Catch Mouse Trap is designed for utmost reliability and ease-of-use. The trap uses an adhesive formula which has been specially designed in a way that it does not get hardened quickly.

When used under normal weather conditions, the trap can last as long as one year.

How to Use: Simply place the trap along a wall where the rodent is seen often. As soon as the rodent would enter the trap, it would trigger a level which would trap inside in a holding area.

User Review: I was able to install and use the trap with ease and the glue used in the trap does not let the trapped vole escape. It is also helpful in trapping lizards and keeping them at bay.

This voles trap takes a quick action whenever any rat, mice, or vole comes near it. It is made up of weather-resistant material so that you can use it in any weather and it is suitable for both indoor and outdoor use.

The trap includes strong jaws and a removable bait cap to refill the bait. Its safe-set design makes sure that you don’t hurt yourself while placing the bait.

You just need to load the bait and place the trap at the place where rodents are seen frequently.

The removable bait cup just twists in and out from underneath the trap, so unlike traditional wooden traps, you don’t have to risk grabbing your fingers when reloading.

The bait cup is designed so that it can’t be reached without activating the extraordinarily responsive trigger that quickly traps the rodent.

The trap effectively trapped the vole with its powerful jaws and can be placed at multiple places.

The following are some of the factors and things that you should keep in mind while buying a vole trap:

Voles are very similar to mice, except that they are very small in size. The best way to get rid of any creature is not by harming them but by humanely trapping them and taking them to a safe place, far away from your home.

There are various humane traps and glue boards available in the market that don’t make use of any poison and traps the vole through baits. The majority of these products can be used anywhere and are safe to use around children and other animals.